When ordering this, we will send you our Rhino Horn Junior. If you are ordering a box of 16 Rhino Horns (mixed is OK) we can offer you 20% discount. Just apply the coupon code «rhinohorn16» when checking out.

Due to the Covid-19 pandemic, the shipping time is longer than usual. You should expect 3-6 weeks for shipping within Europe.

Natural – Effective – No harmful chemicals – No side effects

Rhino Horn Junior is specially made for children at the age of 4–12 years. Junior is 2/3 in size to fit in a child’s hand and has a smaller and longer tip suitable for a child’s nostril.

Our Junior version has been inspired by paediatric doctors at hospitals in France, Holland, and Sweden seeing the huge benefits for their patients using Rhino Horn. That is why they encouraged us to make a kids’ version of Rhino Horn.

Agreeable to use Rhino Horn Junior

The isotonic salt water of body temperature is very agreeable, refreshing and mild in your nose. Soon you will love the fresh and clean feeling after using Rhino Horn Junior. 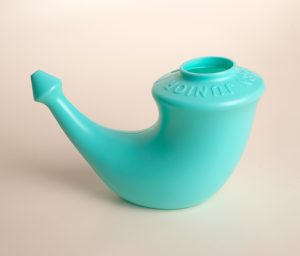 Why use Rhino Horn Junior

The use of Rhino Horn is alleviating ordinary nuisances of a clogged nose, e.g. from having a cold. Mucus is removed and the swollenness of the mucous membranes is relaxed.

Rhino Horn is likely to become a good friend if you are suffering from asthma or respiratory allergy of pollen or dust. The use of Rhino Horn is an effective treatment of occasional sinusitis and even an important assistant at chronic sinusitis. Nasal saline irrigation is mandatory after nasal surgery.

Even severe respiratory illnesses like cystic fibrosis, COPD or ciliary dyskinesia are known to be much alleviated by the use of Rhino Horn. Doctors report a reduction in the frequency of middle ear inflammation in children using Rhino Horn Junior.

Most people like taking a shower simply because it gives a nice refreshed feeling of wakefulness and alertness. An inner shower with Rhino Horn™ has a similar effect.

Use a Rhino Spoon of your ordinary table Salt or sea salt (NaCl) – no expensive salt packages – no extra chemicals.

Rhino Horn is available in this web shop

Rhino Horn was introduced in 1998 and is now available in 23 European countries plus in USA, Canada, Israel, Thailand, Hong Kong and Brazil. Are you from a country with no local distribution of Rhino Horn Junior, you may order from this web shop.

Rhino Horn is CE marked as a class I medical device according to EU Directive 93/42/EEC. The Norwegian Health department has issued a Free Sales Certificate for both Rhino Horn and for Rhino Horn Junior.

There are no reviews yet.

Be the first to review “Rhino Horn Junior” Cancel reply